It’s funny how things can turn around so quickly. When things seem to be at their lowest point, the only other direction to go is up.

I’ve spent the last week at my first host mom’s house, and I think that has been very therapeutic. After a lot of conversations, I’ve stopped feeling like such a bad exchange student for running away constantly from Mom 2 back to Mom 1 when the going gets tough. Mom 2 has reassured me that she doesn’t mind at all, and I’ve finally started to believe her and have started feeling less guilty. Mom 1 is more than happy to have me around and is also constantly reassuring that Mom 2 won’t have any problem with me hanging out with Mom 1. School starts tomorrow as well, and I’m already excited by the prospects of being busier than I am now.

Furthermore, yesterday Virna (Mom 1), Veera, and I went to lunch at the usually family lunch weekend place which is always good fun if only because of its familiarity, good food, and good conversation. Yesterday, the conversation revolved around Bernie Sanders and Donald Trump. The Brazilians think Trump is a joke and are asking me if it’s a possibility that he’s elected to President. Apparently since I’m from the United States, I’ve been deemed as an expert on American Politics.

Speaking of which, I’ve always knows that the USA is a huge player on the world stage from shows like The West Wing and also from history classes in high school, but it’s taken me moving to another country to actually see to what extent the USA plays on that stage. Sometimes I feel like Brazilians know more about American politics than Americans know about American politics. And because the United States plays such a huge role around the world, it isn’t only American citizens who are a bit concerned about the implications of Trump being elected for president come November, it’s people from all over the world.

After lunch, we joined Virna’s daughter and her boyfriend in Ponta Negra, which is a beach in the southern area of the city. Virna’s daughter Luisa and her boyfriend Joe are in Natal visiting from Germany. Joe is from England but he lives and works in Berlin, and Luisa did her exchange ten or so years ago in Germany and has lived there ever since. She’s now a doctor. Anyways, Ponta Negra had a block of Carnaval set up for the evening, and we were going to participate. 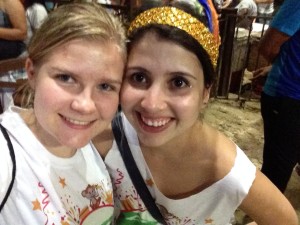 What is Carnaval, you may ask? Broadly, it is merely a celebration of Brazilian culture. Traditionally, in places such as Rio de Janeiro, it is a parade type thing where Samba Schools participate in a contest and dance down the street with masks and costumes. But in other parts of Brazil, it is a giant street party where most people where cool headdresses and are clumped together following a sort of beat/rhythm produced by various instruments and drums. Plus a lot of dancing and drinking. I’ve decided that Carnaval is mainly an excuse for everyone to drink a lot.

Next Saturday I will be going to Recife, which is a few hours south of Natal, with my first host family and some other exchange students and their host families from Natal, and we will be going to a few blocks of Caranaval there. I’m pretty excited. Also, my new goal is to get a cool headdress for the celebration, since I was lacking one for yesterday.