The most frequently asked question I’ve gotten since December started is if I miss my family. I think everyone is expecting the exchange students to have mini meltdowns and fall apart because it’s Christmas season and we aren’t home with our families to celebrate. My parents asked me this too when we spoke on my birthday, and I was also expecting myself to be homesick as holiday season started. I can’t speak for everyone else, but my answer is that yes, I miss my family, but no, I’m not homesick.

The city has put up lights on the trees and a huge tree made completely out of lights which is kind of cool. I laugh every time I see the lights that are supposed to look like icicles since the average temperature here this December has been eighty degrees Fahrenheit. It’s like a personal joke since nobody seems to get it.

Christmas is so funny here. It’s the middle of summer here, so it’s not as big as a deal as it is in the States, so everyone tells me. They also tell me that in Natal, the name of which literally translates to “Christmas” in English, Christmas is a bigger deal than in the rest of Brazil because the city was founded on December 25, 1599. I’m still not sure what this means as the city is lit up and people are out of school and everyone has plans to go to Christmas Mass and spend time with their families with good food. That seems pretty similar to the spirit at home.

To me, Christmas just means family and friends and good food. And I miss my family at home, but I have a family here. 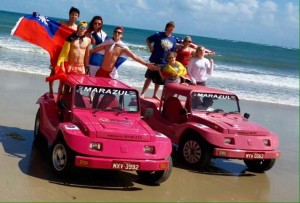 Rotary Natal threw the eight exchange students a Christmas party at the end of November. It was a fun and long day. They told us that we would be taking a ride in dune buggies and would be going to the nearby sand dunes (Dunas de Genipabu). They told us to bring hats and sunscreen and our bathing suits and a dry pair of clothes. That did not prepare me for four hours of being in the back of what can only be explained as a Barbie jeep in full glare of the sunlight going up bumpy and fast off road sand expeditions without seat belts.

Okay, let me explain. Three dune buggies / jeeps / Barbie cars. Four exchange students per jeep, and then Daladiana (important Rotary person) and other Rotary people in the other jeep. We loaded up at a hotel. I brought my sunscreen and a hat and my American flag, and climbed into the back of the jeep, accompanied by Haven (California), Veera (Finland), and Chiara (Germany). Haven was the lucky duck (and also the biggest of all of us) so he got/had to ride in the front so we could all fit in the back. That meant that he was covered and had shade. Oh how I wish that I could have gotten the shady seat. 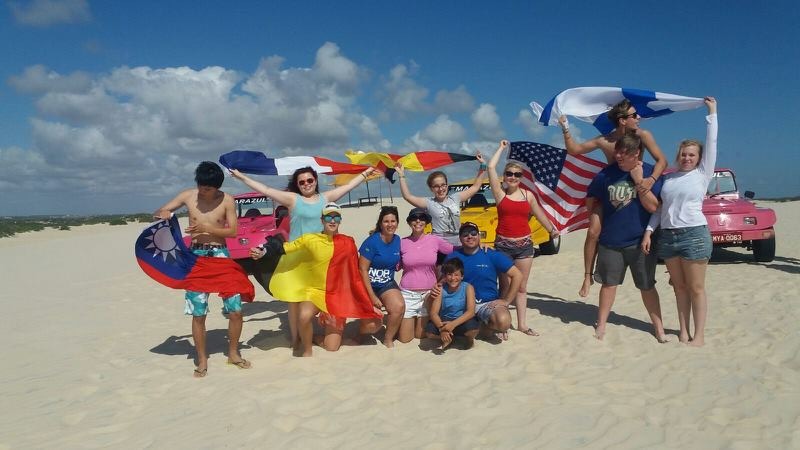 Let me tell you, folks, that a hat and applying sunscreen every thirty minutes and keeping all of your clothes on does nothing against the sun in the location of the highest incidences of skin cancer in the world.

These rides are absolutely crazy and something I have no desire to repeat ever again. The rides were ridiculously bumpy and we had no seatbelts and I would have driven my fellow passengers crazy had they not been screaming along with me. I was a bit worried for my life in parts. I don’t even know how to describe it other than that when the ride ended I literally had bruises on my butt and I closed my eyes during parts so I wouldn’t see the death defying acts of dune buggy riding that our driver took us on.

Something I’m glad they didn’t mention to us at the beginning: that people have died on these dune buggy excursions in past years. I can totally see why. This makes me laugh a little bit because had there been any hint of danger for something like this in the USA we would have had to sign papers and papers making sure that we couldn’t sue if somebody died, but here in Brazil it was just hop in and you might die but at least you’ll have fun doing it.

After the buggy rides of doom that we didn’t die in, we went back to the hotel where we first started, and had lunch and some free time that consisted of swimming in the pool or ocean or hiding in the shade and talking (me).

Have I mentioned that I am very pale and do not tan ever? This can make life miserable at some points. Had I known what I was in for during the dune buggy ride I would have brought a long sleeve shirt and long pants and wouldn’t have minded my clothes getting wet and me being too hot, since being hot is better than being sunburnt.

The best part of the party was when Rotary gathered us together in front of a TV and told us that the president of Rotary International had a message for us. When they pressed play what actually appeared was a video of each of our families saying hi and wishing us Merry Christmas. It was very sweet. Jeanne from France cried she was so happy. 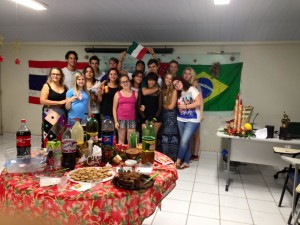 Yesterday, we had an exchange student party in Portuguese class. So this included all of the exchange students from Rotary and from AFS, as well as our teacher. This was also a pretty fun party since we all put on Christmas music from our various countries and danced and sang and ate too much food.

As for my upcoming Christmas plans, tomorrow we will be going to Christmas Mass and then we will have the Christmas meal at my aunt’s apartment. Family and friends. That seems pretty good to me. I’m going to bring chocolate chip cookies and peanut butter blossoms.

When I make chocolate chip cookies, they never come out right, but the Brazilians all love them since homemade cookies are a novelty. I mean, they taste fine, but they don’t taste the way my mom and sister make them at home. As for the peanut butter blossoms, they do come out right, but the chocolate is different, so that part is a bit disappointing. I bought bars of Hershey’s Chocolate to put in place of Hershey’s Kisses and yet Hershey’s brand chocolate here tastes different than it does in the USA. So in short it is terrible. All of the chocolate here sucks. But at least the cookie part tastes great. And those are also a huge hit here. My family is very excited about my cookie making promises for Christmas. I’ve never been a big baker before, so it’s kind of fun to bring things that I don’t think are a big deal but then to have everyone fighting over the last cookie.

Merry Christmas to all of you back home!